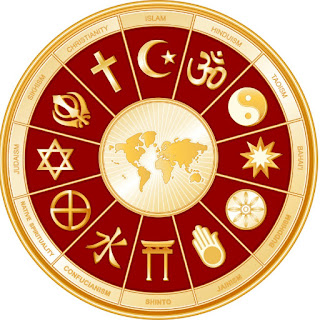 Recently the concept of “Interfaith Dialogue” has been confronting me from several directions.  Actually, it might be more accurate to say “interfaith dialogues” as there seem to be several concepts coming under this rubric.  There seem to be a number of purposes for engaging in interfaith dialogue: understanding, conversion, missionary assertion of one’s religion, and so on.  Most commonly it seems to point toward building bridges of understanding between faith communities.

I am neither an “expert” on interfaith dialogue and engagement, nor a scholar nor an academic.  I don’t have a great deal of knowledge in this arena, and I do not have access to scholarly and academic works, except those that are available to the general public in libraries and online.  So, if you choose to engage in a discussion, I will be learning along with you.

While I am not well versed in the topic of “interfaith dialogue,” I am not unaware that not all “communities of faith” in a given tradition – Islam, Hinduism, Judaism, for example – share the same reality, or share the same vocabulary, or even share the same definition of words.  According to the World Christian Encyclopedia, released in mid-2001, by Oxford University Press, there are 19 major world religions which are subdivided into a total of 270 large religious groups, and many thousands of smaller ones.  How do we even define a “faith community?”

In Buddhism, we have Zen, and Tendai, Pure Land, and Vipassana, and . . . well it’s a very long list.  People immersed in, and/or adhering to a particular school’s doctrines will probably not approach interfaith dialogue from the same understandings.  For example, in Tendai Buddhism, the primary text is the Lotus Sutra, which teaches that the Buddha is "a transcendent eternal being, preaching to myriad arhats, gods, bodhisattvas, and other figures using all sorts of sermons, lectures, imaginative parables, and miracles."  (I find this statement on multiple websites.  If anyone knows an original source for it, would you be so kind as to post it in the comments?)  In Theravāda Buddhism, the Buddha is in an entirely separate category of being:  Buddha.  The Buddha is neither divine nor mortal; neither transcendent nor immanent.  The Buddha is a being sui generis.  A Buddha is . . . well, just a Buddha.

The point to be made here is, that within a given faith group or denomination, some terms such as Buddha, Nibbāna/Nirvāṇa, Enlightenment, Kamma/Karma, Dhamma/Dharma, Dukkhā, Samādhi, and many, mnay more, may be clearly and specifically defined, given a single meaning.  But within the larger “religion” in which a faith community is embedded, agreement may not be so apparent.  Agreement may not even exist.  And we may find local usage, local conventions are at odds with the larger denomination. For example, from a Zen perspective, “enlightenment” is something quite different that what is understood in Theravāda sects. And when one goes “outside” the religion, such as when a Christian or a Muslim tries to understand Buddhism, authentic “Buddhist” understanding may be lost altogether.  This is true not only within Buddhism, but in other religions as well.  Such terms such as "soul" and "spirit," “Christian” and “Muslim,” “sin” and “salvation” and “love” and “compassion” may be clearly and specifically defined, given a single meaning, in some groups, but in other, closely related groups, and in the larger culture, or on the global stage, these words and others become rather goopy, having from 2 to a dozen or more meanings.

Unfortunately, it is often the case that people do not have an awareness of this nature of language, and quite naturally assume that the meaning that they have been taught is universally accepted, that the understanding they hold is absolutely correct and appropriate.  It is often the case that people operate with the assumption that we all share the same concepts, referenced by the same words.  Such differences in meaning and understanding often result in misunderstandings.

In seeking understanding in any interfaith dialogue, it would seem therefore necessary to identify precisely the community of faith to which one belongs.  It would seem to be necessary to be mindful of language, and communication.

A further note on the topic of “language” in interfaith dialogue.  As I have encountered interfaith dialogues, the language of the interlocutors has, for the most part, employed terms, concepts and categories of thought that are firmly rooted in Western Christian paradigms.  I’m not sure that imposing such conventions is really helpful in “building bridges of understanding.”   In fact, it may hinder the process.  Coming from a Buddhist perspective, using terms such as God, sin, salvation, etc. to describe Buddhist thought is inaccurate, and for some – Buddhist and Christian alike – is likely to be confusing.  And may impede interfaith dialogue.

That said, I think there are a multitude of “topics” around which interfaith dialogue could take place, and I welcome your comments.  Following are some of those topics.  This list is not exhaustive, merely a starting point.  Let’s see where things go, and please feel free to contribute different topics in your  comments.

1.  Cosmology & Cosmogony: the origin and general structure of the universe understood philosophically and/or physically.  Issue of “time” and the end of time/eternality of time/artificiality of time/cycles of time.
2.  Deities/Pantheon:  Is there one god, multiple gods, or is “god” and empty concept?  If a god or gods exist, what is their nature?  What is their relationship with humans?  With nature?
3.  The Human Condition:
a.  what it means to be “human:”  soul, spirit, body, mind, brain, etc.
What a person is made of.
b.  problem(s) in / with the human condition
c.  solution to the problem(s) in / with the human condition; efficacy?
4. Soteriology/Soteriological goal: religious doctrines concerned with salvation; the desired goal for participants in any given religion (eg. ‘heaven,’ ‘nirvana,’ ‘moksa,’ etc.)
5.  Moral Code/Moral Reasoning: what is the source of the moral code?  What is prescribed & proscribed?  Are there moral precepts to guide one in choosing well?  When it comes to choosing well, what does your faith say about the role of patience and wisdom in your faith community?
a) descriptive ethics
b) normative ethics
6.  Source of Religious “Authority:”
a. texts
b. religious class
c. the individual
7. Religious Observance: How do people of a particular faith tradition gather to worship, and what kinds of special religious things happen on special religious days?
a.  sacred space
b.  sacred activity
c.  sacred objects/ iconography - conventionally agreed-upon ways of presenting deities, persons, or ideas visually
8. Orthopraxy/Orthodoxy vs. Heteropraxy/Heterodoxy: issues of authenticity/legitimacy of practice/doctrine.

And there are specific issues of “doctrinal practice,” that is how one “does” one’s religion.  We might characterize this as “living one’s theology” [more on the term “theology” later].  As we live our lives, our mundane, day-to-day existence,  there are a multitude of important issues that can, and probably should, be addressed from a religious perspective.  For example:

Stewardship: concern about the preservation/conservation/exploitation/degradation of the environment;

War and Violence: can either ever be justified?  What is taught regarding respect for life?
Goodwill/Inclusion: welcoming the stranger and attending to the needs of others: the hungry, the homeless, the poor, the sick, or the imprisoned?  what boundaries are important and necessary to protect the integrity one’s goodwill gestures?

Vocation/Lifestyle: engagement/interaction with others throughout your various jobs, school involvement, service activity, and club/organization memberships?

Management of Resources/Finances: In a world that encourages the consumer mentality of craving and buying more “stuff,” what does the doctrine say about acquisition of things, and about the handling and management of money?  What does doctrine advise regarding support of the faith community?  Regarding generosity with your time, your talents and skills?

It is my hope that over time we can explore some of these topics in blog posts.